As you can see from the videos, Nigel plays a lot of Hardware synthesizers, as well as using Soft Synths.

Some of his favourite Hardware Synthesizers are:

The Little Phatty is a powerful synth with a layout and design that looks less into the past and more towards the future.

The Little Phatty boasts a 100 percent analog signal path, 100 user editable presets and a 37-note keyboard. It is a monophonic synth with two oscillators. The filter is the classic Moog ladder design.

The EKOsynth P15 from the Italian make EKO is a very rare preset-based synthesizer, circa 1979.

The signal path is entirely analog from start to finish, and the result is very warm sounding. 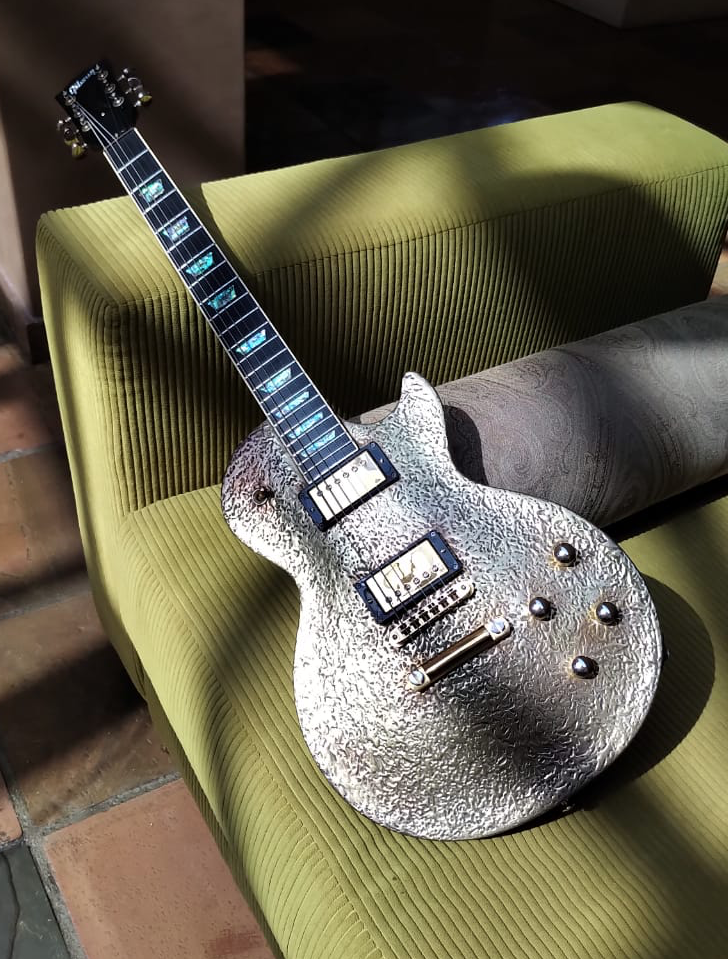 The body is made of Mahogany and is capped with Maple. This is a Les Paul Alloy Elegant Model with a Copper Alloy Metal Finish, not Copper paint. Beautiful Abalone Inlays on a Dark Ebony fingerboard. According to the Custom Shop the Series numbers up to ten and were available in three finishes (Copper, Brass, and Aluminium).100% ORIGINAL.

A Few of the Vintage Synths of Devine Lie

The OB-12 is a 12 voice synth with 4-part physical modeling synthesis. Loads of real-time knobs (22), sliders (24), and buttons (33) with a traditional layout that gives you fast hands-on access, and control of most parameters. Extra hands-on goodies include a ribbon controller, pitch bend, and modulation wheel. Aside from great analogue sounds, the OB-12 has an amazing set of hi-tech features! The OB-12 features a high-quality LCD display that actually draws out all of the parameters you are changing. There are on board 5-band graphic & parametric EQ, ADSR’s with delay time and double decay. An addictive Motion Recorder and manual or auto oscillator morphing for animated sounds or effects. Phrase Recorders and Arpeggiators with Independent tempo controls and 5 dedicated buttons are onboard with plenty of features and are MIDI sync-able. There is also an extensive effects section that gives you reverbs, delays, chorus and lots of overdrive algorithms.

Sequential’s MultiTrak had everything and to this day, it still sounds great! During the era of the Roland Juno synths, Sequential overhauled their programmable little SixTrak analogue sequencer synthesizer and came up with the MultiTrak. It’s a six voice analogue synth with sophisticated filters, envelopes, modulation capabilities and built-in sequencing. As was the developing trend around this time in the mid-eighties, programming was being streamlined into using the buttons on the matrix keypad to assign parameters to a rotary knob. (The only dedicated knobs are for sequencer volume and speed, chorus depth and rate, master tune and volume.) There are 99 memory patches for your analogue sound creations. It also features a nice arpeggiator withhold and transpose functions. But lying at its heart is a sophisticated (for 1985) onboard sequencer. It could store up to four polyphonic sequences with a metronome, 1600 note memory, an overdubbing mode and quantizing autocorrect) functions, individual track volume and speed controls. Sequences could be chained together and patches could be changed on the fly. Sequences are recorded in real-time.